'The Art of Mischief' Opens in Downtown Los Angeles and Pasadena!

on June 01, 2016
Announcing the upcoming art exhibition and live performance. 'The Art of Mischief' is happening in Downtown Los Angeles on April 1st and will be on display through May. Exhibition tour continues to Vroman's Bookstore in Pasadena from June through July. 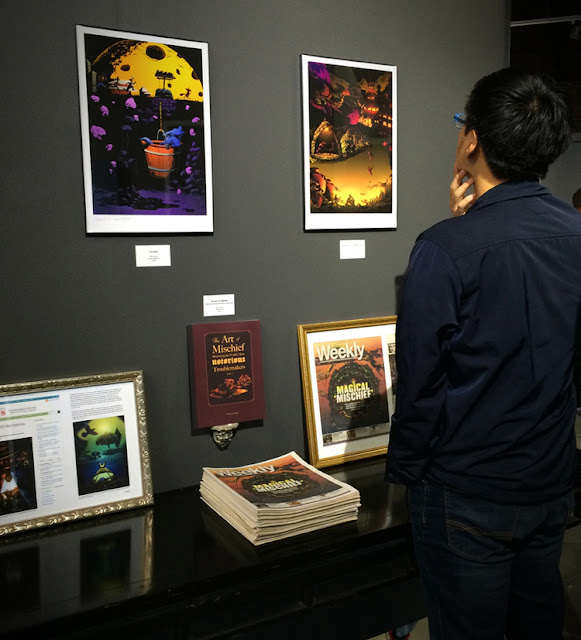 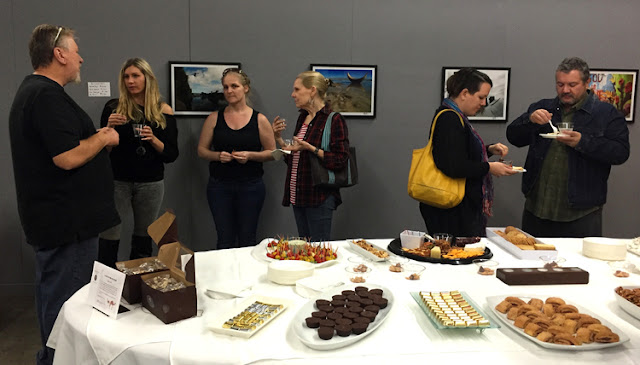 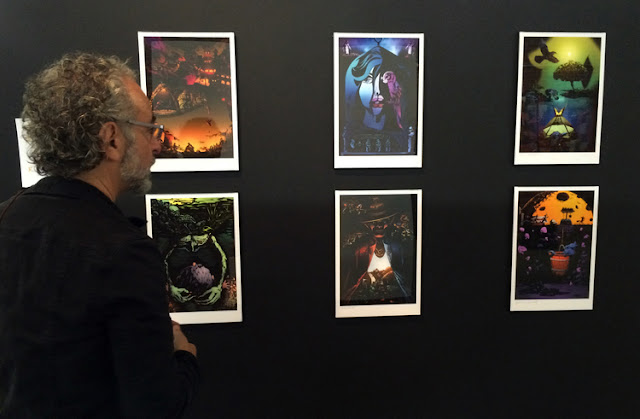 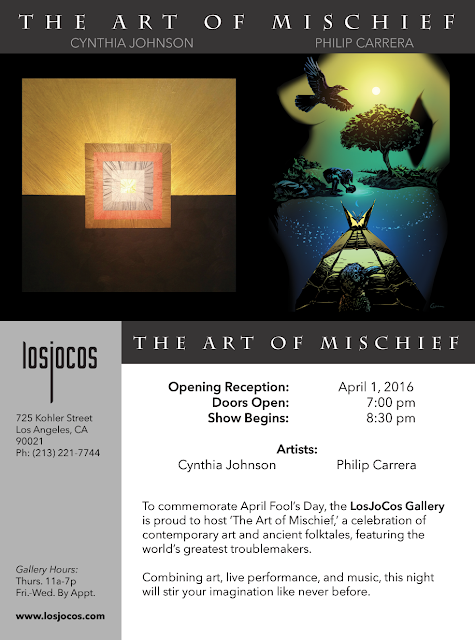 In the 16th Century, the fall of the Aztec Empire was set in motion when the arrival of the fair-skinned Spaniard Conquistadors was believed to be a friendly visit arranged by the Aztec’s light-skinned, feathered serpent god Quetzalcoatl.

Around that same period, legions of treasure hunters died searching for the fictitious city of El Dorado, an Amazonian city, made entirely of gold, supposedly located somewhere in Colombia.

On October 30, 1938, the infamous radio play “War of the Worlds,” aired nationwide in the United States. Staged as fake news bulletins, it frightened listeners into believing that Earth was being invaded by aliens. This resulted in panic and outrage, resulting in federal regulations set by the FCC.

Approaching the year 2000, analysts predicted that at the stroke of midnight, entire computer networks would crash, resulting in widespread dysfunction around the world. Corporations spent billions of dollars leading up to Y2K, only to realize that their efforts were misguided and unproductive. The year 2000 came and went with minimal issues.

This is the power of story.

Stories affect our behavior, provide us with a sense of purpose, and give our struggle meaning. Revolutions begin with story. Religions are filled with stories. Stories make us laugh, cry, shout with rage, and sigh with despair. Stories affect us without our even knowing it. It’s like walking into a room filled with the fragrance of your favorite food. You weren’t really hungry before, but now you are.

We all have dreams, desires, and aspirations. We all know what it’s like to feel loss and failure. Everyone has fears and insecurities. Yet, we race through life thinking that everyone else has it better than we do. That nobody else understands our struggles. ‘They’ have it all figured out and we don’t. But, if we take a moment to think about it, we have more in common with the 13th century explorer venturing out into the unknown and the 2 million year old cave dweller seeking safety from the outside threat, than we think.

These common themes are what I am drawn to. My paintings are inspired by tales from around the world and range thousands of years. Some may explain why it rains or where our food comes from. Others may attempt to define what the stars mean or how we should behave. Some stories are sacred, featuring shapeshifters and supernatural creatures, while others are intended to entertain, and exist independent of time or space. Each story is carefully selected, thoughtfully interpreted and rendered to capture the spirit in which they were written. I use color and light to capture their mood and emotion.

This series highlights the things that matter to us most and illustrates why timeless tales such as these continue to be loved centuries later. Be they sacred or for entertainment, they are a connection to the past and will remain relevant well into the future. For as long as there are humans, there will be stories. 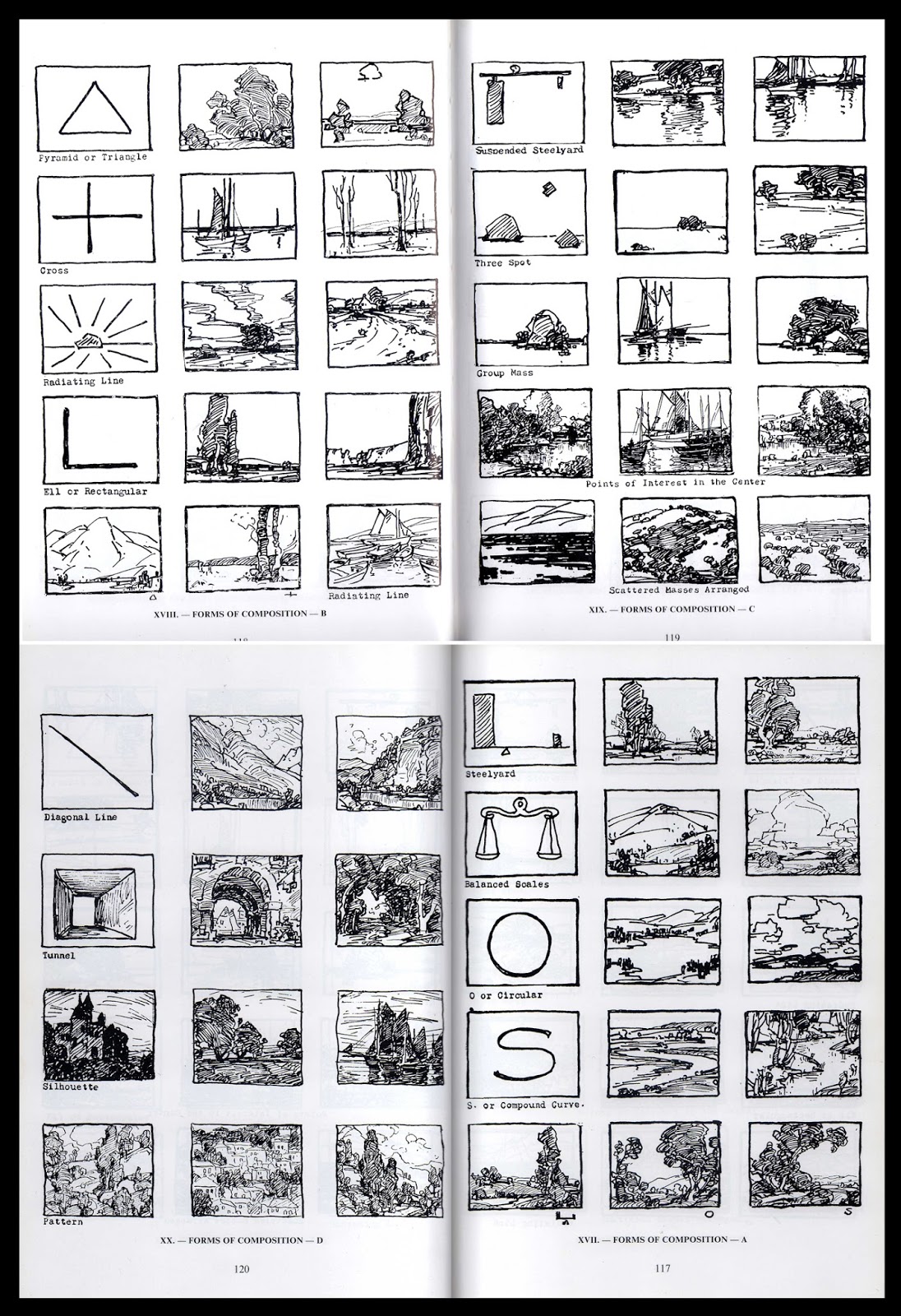 The next step, following the big idea of your picture, is the composition. Composition is designing the layout of your elements; the structure, or skeleton of your image. It quietly holds your painting together, and is often presented in black and white, as line art. A successful composition can be reduced to an abstraction (see diagrams below). Fortunately, for all us artists, Edgar Payne has done the heavy lifting for us and shown exactly how to do that. Basically, if you want your painting to be compelling, and read with great impact, start by choosing one of these 13 compositions that best matches your 'big idea'. As I study these, I notice that one thing these compositions all have in common is 'asymmetry'. From the grouping of the major masses, down to how each element is designed, asymmetry is applied intentionally. Even the 2 comps called "O" and "Balanced Scales", are arranged asymmetrically. Why? Because asymmetry is more interesting 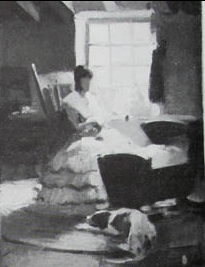 Values and Tone - Where Paintings Begin

Andrew Loomis - 3 values Andrew Loomis - 4 values Values pull things forward and push things back, depending on where they are in relation to one another. F our values is all you need to enhance clarity and readability: White, light grey, dark grey, black. In fact, if you can reduce your design to 2 or 3 values, even better! Why? Because fewer values = simpler composition, and simpler composition = clarity. And clarity is what picture making is all about. So how do they work? The purpose of applying tone to your compositions is twofold: 1) to organize the elements within the picture through grouping, and 2) to add drama. Work in small thumbnail form (business card size, yes, really). Wherever the greatest contrast in tone is, that's where your area of interest is located. You'll notice that even when grouped, tones often merge together. These merged areas are called "passages" and it's where shapes lose their edges. 2 things to ask yourself when designing